Poco X3 NFC has leaked online just hours before its official global debut. Some key specifications were already rumoured and the new information corroborates with those earlier speculations. The Poco X3 NFC design has also been revealed as part of another leak so now we have a fair idea on what to expect from the upcoming successor to the Poco X2.

According to an exclusive report by GizmoChina, the Poco X3 NFC is powered by the Qualcomm Snapdragon 732G processor that was announced recently. The phone features a 6.67-inch Full HD+ display with a 120Hz high-refresh-rate and a punch-hole cutout for the selfie camera. Moreover, the Poco X3 NFC comes with 64MP quad cameras and a 5,160mAh battery to boot with fast charging. 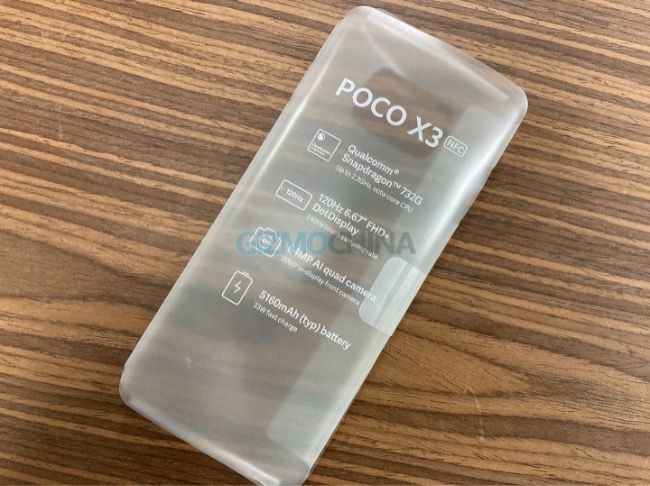 Another leak by noted Twitter handle Digital Chat Station also hinted at the existence of a Poco X3 Lite with dual cameras on the back. However, there is no official word on the launch of a “Lite” variant of the Poco X3. Nevertheless, the picture posted also gives us a clear look at the Poco X3.

As per the multiple leaks around Poco X3 NFC, the phone is expected to feature a 6.67-inch Full HD+ (2400 x 1080 pixels) resolution display with a 120Hz high-refresh-rate and HDR10+ support. The screen has a centre punch-hole notch cutout for the 20MP selfie camera and is further topped with a layer of Gorilla Glass 5.

The X3 is likely to have a glass rear panel and could be water repellent certified. The phone has been confirmed to be powered by the Qualcomm Snapdragon 732G processor with an octa-core processor and Adreno 618 GPU. This could be paired with upto 8GB RAM and 256GB storage with the phone running on MIUI 12 based Poco launcher.

The Poco X3 comes with a quad-camera setup that consists of a primary 64MP camera with an f/1.8 aperture, an 8MP ultra-wide-angle camera, a 2MP macro camera and a 2MP depth sensor.

It has a side-mounted fingerprint sensor and is equipped with a 5,160mAh battery to boot. The battery support 33W fast charging out-of-the-box.