While there was nothing on the upcoming new iPhones in last night’s Apple event, Apple did make time to talk up the Apple A14 SoC that powers the new iPad Air and historically, Apple has used the latest silicon for iPhones as well. It was indeed odd to hear about the Apple A14 SoC with the iPad Air, and not the iPhone 12 series but it shouldn’t make much of a difference as far as the processor is concerned, because Apple has always used the same silicon for iPhones and the iPad Air.

The new chip from Apple was more or less expected. It’s the annual refresh that debuts with the latest iPhone, only this time, Apple took the industry by surprise by moving to 5nm before Qualcomm or Samsung did. Huawei usually beats Apple to the announcements, but things aren’t going so well with the Chinese dragon. As a result, the Apple A14 SoC becomes the first commercially available 5nm chip. 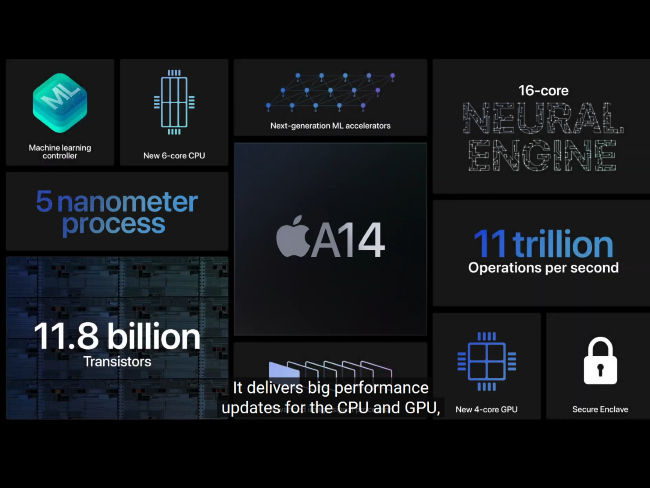 How much of a difference does it make? The 5nm manufacturing node is smaller than the 7nm node Apple was using before, and this helped Apple decrease the die size further, even while adding more transistors. The result is of course better performance with lower power draw.

Funny thing is, Apple had to compare the performance of the new A14 chip to the two-year old A12 chip because that was the one powering the previous iPad, and claimed the A14  is 40 percent faster. The A14 CPU sticks to the 2+4 core config with two high performance cores and four efficiency cores. The clock speeds were not disclosed at the time of launch, but a six-month old Geekbench listing claims the A14 will breach the 3GHz mark. The leaked scores pegs the A14 to be more powerful than the Apple A12X SoC on the iPad Pro.

On the GPU side of things, it now has four cores and Apple claimed a good 30 per cent boost in performance as compared to the A12 SoC.

Even more impressive is the jump in AI performance. The Neural Engine in the A14 has sixteen cores, capable of delivering 11TOPS throughput, which is double the performance of the A12.

What’s not impressive? Becoming the first to move to 5nm and not talk about power efficiency at all! Given that a primary objective in adopting the latest manufacturing process is to bring down power consumption, it was odd for Apple not to address anything concrete around power draw. Hopefully the iPhone event will have more in store for that. 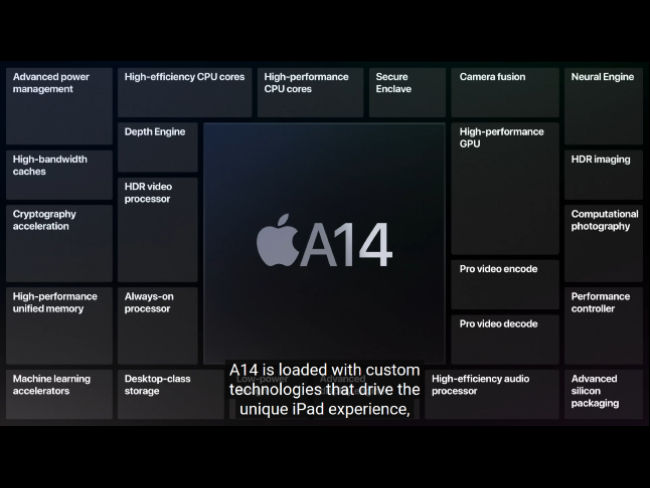 There’s likely to be a lot more to the chip than what was announced. A teaser slide during the presentation left a lot of things unanswered. A new ISP? Desktop class storage? New Memory chips? We expect all the questions to be answered at the iPhone event that Apple is expected to host either by end of September or early in October.